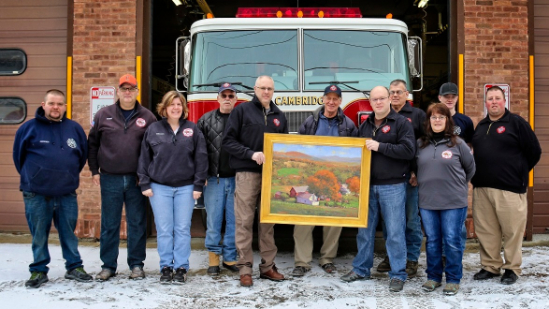 Photo by: Dean Darling
LOCAL CAMBRIDGE ARTIST GEORGE VAN HOOK DONATES ARTWORK TO THE CAMBRIDGE FIREHOUSE FUND
Cambridge, NY-Cambridge NY Fire DepartmentRecently, a group of Cambridge, NY volunteer firefighters joined artist, George Van Hook, at his studio in the village of Cambridge. George had extended the invitation to his studio after spending an evening at RoundHouse Bakery Café, where he learned of the fire department's plans and fundraising goals for a new firehouse. A walk home from a girls’ basketball game with resident, Ken Gottry, further aroused George's interest in the fire department's needs.
George's invitation to his studio had dual purposes. He wanted to let the firefighters know he is humbled by their bravery and commitment to their community. He also wanted to offer a donation, a way to thank the fire department. He asked that his guests select a painting that would help generate monies for the firehouse fund. Selecting the painting was not easy, with so many great choices it was truly a bit overwhelming. The group finally selected a beautiful 24x30 oil on linen of the Reynold's Farm. Firefighter, Gerald Aiken, recalled stories of sheep being herded from the Reynold’s Farm right through the village to pasture off in Ash Grove.
The fire department will offer 500 raffle tickets at $20 each for the chance at winning the beautiful George Van Hook painting. Tickets will be available February 24 – please email firehousefund@gmail.com, see a firefighter and look for tickets at local businesses. Funds raised will benefit the Cambridge Fire House Fund.
###
About the need for a new Cambridge NY Fire House:The current Cambridge Fire house was built in 1951 to house three (3) trucks built in that era. The facility now houses five (5) trucks of the current era that must be customized to fit within their 1951 house. Even with these custom alterations there is still less than 2 feet of clearance. In addition, the 3,300 sf space does not allow for the 27 active firefighters to safely prepare and activate to calls. Additionally, based on call history the location of the current firehouse requires the trucks to travel through the busiest intersections and only streetlight in Cambridge.
There are serious safety concerns for our Fire Department Volunteers, pedestrians and vehicles, at the current location on Route 372 (Cambridge Main Street).
• Trucks must pull directly into oncoming traffic, across pedestrian sidewalk
• Two volunteers are required to stand in the middle of Main Street to physically stop traffic for trucks to pull into and out of the bays.
• There is no off-street parking for volunteers to safely park and enter the building.. Parking is on Main Street, Pearl Street, and St. Luke’s – all requiring them to physically cross a street to enter the firehouse.
The Cambridge Firehouse plan is a $3.7 million dollar project that will provide a safe environment for the Cambridge Fire Department Volunteers to work from to keep their neighbors safe. Each dollar raised will reduce the cost of the building while mitigating an increase in Village taxes.
Learn more about the Cambridge Firehouse Project here:
https://v3.cambridgeny.gov/new-firehouse-discussion-2
About George VanHook:
George Van Hook was born and raised in Abington, Pennsylvania, a northern suburb of Philadelphia. He began painting very early and was able to participate in the vibrant artistic culture of the region. The family owned a farm in Bucks County, home of the Pennsylvania impressionists, and he became heavily influenced by their fine academic training coupled with a love of the prosaic landscape. Another early local influence was the “Brandywine Tradition”, the illustrative work of Howard Pyle and the generations of Wyeths. This was further enhanced by a close association with coastal Maine. George has spent many summers painting in the mid-coast area of Rockland and Rockport Harbor, and on North Haven Island where his wife’s family owned property adjacent to the famous Boston artist Frank Benson.
Van Hook’s love of the European tradition also began early. He spent two summers during high school filmmaking throughout France and England. This allowed him to visit many of the great museums, and further increased his commitment to become a professional artist. Following college, he left for Paris and spent nearly a year copying at the Louvre and travelling through France, Italy and Holland making numerous paintings “en plein air”. He returned to California, where he continued painting the landscape and figure out of doors. After marriage and the start of a family, George returned to the East Coast, eventually settling in Cambridge, NY, a beautiful nineteenth century village in the Hudson Valley. His wife is a Mycological Consultant for Ecovative. Their three daughters were often models for his paintings when younger, and are now grown and successfully independent.
Van Hook thinks of his paintings as primarily a visual response to the selected environment, be it landscape, figure or still life. “I want the color to be beautiful and the drawing firm and secure”, he says. The paintings are a marriage of external and internal forces – what emerges on the canvas should be a reflection of both the beauty of the world and the artist’s most inner response.
For the last five years, Van Hook has been involved in Plein Air competitions and has won numerous awards.
Learn more about George Van Hook https://georgevanhookfineartist.com/
##
Photos by Dean Darling
UPDATE
UPDATE